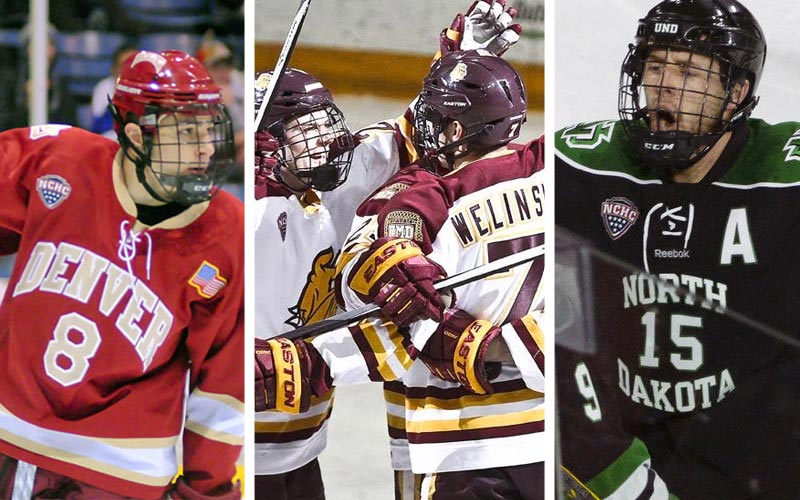 There’s plenty more on the methods behind this analysis here, here and here. I tried to reduce subjectivity, but that’s not entirely possible. To deal with that, remember that all of these assumptions will be constrained, because there are a few constants that MUST be true in the model:

Finally, noise will happen, and I can’t predict it. That’s why we watch the games and they play the seasons. However, hopefully in the second year of the model, with an additional year’s worth of data, the noise will begin to shrink.

First of all, let’s look at how shooters from each class within each team performed last season:

Clearly seen here, no team relied more on their underclassmen than UNO, and no team will miss their seniors more than Miami, although North Dakota, Duluth and Denver also lose talented senior classes. Duluth, however, loses the fewest number of players (4), while North Dakota loses the most (9).

Something interesting to note here: many have commented how Duluth only loses four guys. This is true, they do lose the fewest bodies and smallest percentage of the team. However, in terms of possession, Duluth actually loses slightly more than Omaha, and the shooting percentage lost is hefty. This is almost entirely Justin Crandall. Also, while Miami appears to have lost a lot, North Dakota and Denver are not far behind. But if you look at what Denver retains compared with those other schools, you begin to see an edge in depth and experience.

Alright, on to the predictive model.  We assume all the returning players will perform at about the average rate they performed last season. Obviously this won’t be true down to the player, but at the aggregate, it should pan out – and I’ll just have to hope the team-level adjustments aren’t huge.

In addition, I’ll make the assumption that each team’s new players will perform at about the rate of the last two years averaged. This year, there was much more graduating talent than last year, and across the board there are more freshman. I’m hoping that by instituting an average freshman performance across years, the imputations will be more accurate than they were last year.

Putting this all together, we have a rough approximation of what sh%, sv% and possession might look like for this NCHC season. Assuming we’re comfortable with these numbers, all we have to do is plug these numbers into the model, and we get:

In a stunning turn of events, statistical modeling suggests Denver will edge out Duluth for the NCHC regular season title (44.0 computed points for Denver, 43.8 for Duluth) Let’s discuss the data team by team:

Now, just to be clear, the inputs are up for debate until a puck is dropped. Here are the admitted weaknesses that could contribute to noise in the model:

We get a really good idea of whether the predictions and model are performing well after each team has played 12 of their 24 league games. Yes, that’s halfway through the season, but that’s when we have enough data that the violent swings settle.

So that’s it – my 2016 NCHC odds-on winner is the Denver Pioneers, barely edging out the Minnesota-Duluth Bulldogs for the Penrose Cup. If you don’t like these predictions, don’t blame me. Blame the numbers. Then, root for your team to defy expectations. I know I will.

Oh, and don’t forget to check back in with the model and all the relevant stats, which I track here: joelgehringer.com/thelab/NCHC2016. in fact, go ahead and bookmark that while you’re at it – I update every weekend after the games have ended so you can see what the stats say about your team’s expected performance throughout the NCHC season.

Thanks for reading, and we’ll see you again in a few weeks to check in on the season!