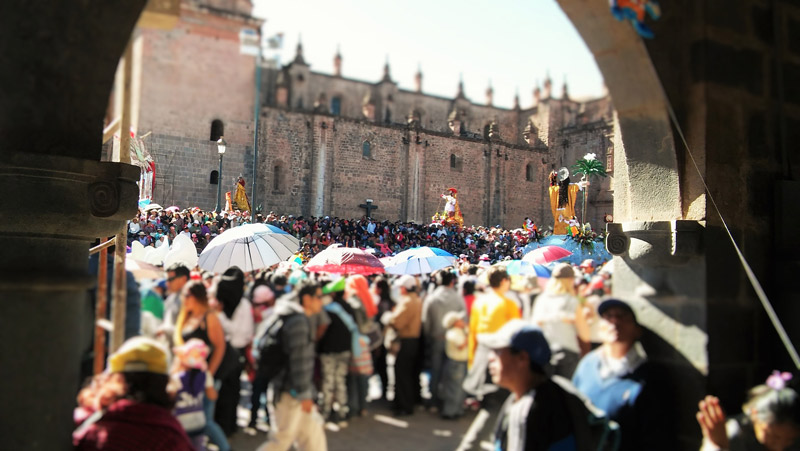 On our final day in Cusco – May 26, 2016 – Taylor and I wanted to see some of the attractions around town: Sacsayhuaman, Qorikancha and the Inca History Museum. Since our AirBnb was just a block away from Mercado de San Pedro, we decided to start our morning at the market. Maybe we could snag a fresh snack for breakfast.

As we got to the end of our street, we saw the market in full swing – and do I mean full. The narrow sidewalks were packed shoulder to shoulder with shoppers and merchants. Well, for me, mostly elbow to shoulder with short, unstoppable Peruvian grandmas. All around sellers yelled to passers-by, holding out pomegranates, trays of chica, buckets of indistinguishable fish parts, and laminated posters of Jean Claude van Damme(???). Holy cow, I thought, this is a hoppin’ market!

But as we shoved our way through the crowd to the next plaza, we saw an even more expansive sea of Cusquenos, this time surrounded by booths, speakers blaring dance music, and street performers. Clearly this wasn’t a regular day at the market.

We continued to push our way through the throngs until we arrived at the southwestern corner of Plaza de Armas. When we arrived, we found the streets crammed with people, parade floats and stages set up outside the two churches, complete choirs and marching bands.

“I don’t think we’re going to make it to the tourist sites,” I said to my wife.

Unknowingly, we had planned our last day in Cusco on the 60th day after Easter. In Cusco, that means a party – the annual Corpus Christi festival. One one hand, it was unfortunate for us – we wouldn’t be able to see some of the sites we had traveled 3,000 miles to see. On the other hand, how lucky can you get? We managed to get ourselves smack in the middle of Cusco’s biggest party of the year, and it was a total surprise.

Meanwhile, though, back in the middle of Plaza de Armas, we had no idea what was going on. We were able to duck into a relatively quiet restaurant while the plaza buzzed outside and paraders carried banners and litters with idols around the plaza. I quickly Googled “festivals in Cusco” and found out what was happening. The best site I found was this one, which is in Spanish, but I comprehended enough to get the jist – and even through my poor Spanish reading skills, I found myself fascinated. 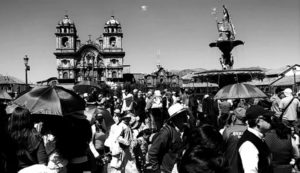 Corpus Christi is one of the largest religious observances in Peru. Roughly 50,000-60,000 people descend on Cusco from the surrounding towns and countryside for the two-day event. The proceedings begin the night before, when the program is officially opened, and people drink and eat traditional foods. Then, the next day, the archbishop of Cusco’s Catholic cathedral emcees the procession, as a delegation from each of Cusco’s 15 Catholic churches march from their church to the center of the city, carrying a litter topped with an artistic representation of their church’s namesake saint. The statuettes are colorful and elaborate, some adorned with jewels, silver mirrors and fine cloth.

The whole spectacle unfolds over an entire day, culminating with more drinking and partying, as well as gourmet dishes such as the baskets of roasted guinea pig I saw proudly displayed outside a few restaurants.

I was most amazed, however, when I learned that this isn’t an entirely European/Catholic invention. Like many aspects of the culture in Cusco, which sits deep in Quechua country, the festival represents a mix of Spanish and Inca traditions. The festival date back before the arrival of Europeans in the New World. For the Inca, the festival honored not saints, but the former rulers of the Inca empire. Once a year, the Inca processed to the city center (now Plaza de Armas) with the mummified bodies of their deceased emperors (by 1532 there were 12 of them). The Inca believed human bodies must remain intact because the rulers simply entered a new state of being in their death. Therefore, once a year, they needed to meet up to commune with the greatest Inca god – Inti, or the sun. So the Inca dressed up their former rulers in their favorite clothing and jewelry and honored them with a massive religious procession.

It’s amazing that this even has survived until 2016, and it’s incredible how, despite the Spanish efforts to import a pure European culture, the local customs never disappeared. Instead, they were re-purposed and expanded. It’s a great example of just how easily religion and tradition are molded to be whatever they need to be – regardless of the original intentions. Perhaps our traditions aren’t so “traditional” either.

I didn’t get a ton of photos or videos since we were both kind of taken by surprise by the whole thing, but we got to see elaborate costumes, stages, bands and traditions up close. Here’s a great photo slideshow of some of the sights we saw.

Even though we didn’t get to see the Inca sites, museums and restaurants we had hoped, I’m glad we lucked into seeing the Corpus Christi festival. That’s the kind of surprise and serendipity travel can afford you if you’re lucky and open to adventure. Here’s hoping Taylor and I (and you!) find many more “Corpus Christi” festivals in the future.

Here’s a short video of the crowd at Plaza de Armas during Corpus Christi 2016. If you look closely near the cathedral, you can see on of the saints being carried around the plaza.

Check out more posts about our adventures in Peru below!