I suppose I’m a little late to comment on the Ferguson mess. I am so far removed from the issues and parties involved that I probably shouldn’t comment on it, so I won’t… too much. However, the way those few weeks played out might have damaged that community and its relationship with law enforcement permanently. What were those cops thinking? What kind of message do armored vehicles and military-grade assault rifles send?

I bring this up because as Ferguson was igniting, I had just finished reading David M. Kennedy’s Don’t Shoot: One Man, A Street Fellowship, and the End of Violence in Inner-City America

. Again, I know very little about this area, which is probably why Kennedy’s words seemed so profound. The killing of an unarmed teen by a police office in Ferguson and the violent crime spikes among inner-city youth in Boston are totally different issues, but the roots of the tension are the same.

Kennedy, is a passionate, pragmatic consultant, and it comes out in his writing style. Academics or political correctness aren’t his concerns in this book – his concern is what works. And he’s very sure he knows, because he’s been there and he’s done it.

Not a cop, not a former drug dealer, not a policy wonk – Kennedy is a researcher who, working with the Boston Police Department, managed to almost completely eliminate gang-related shootings in Boston’s worst neighborhoods. He did it again in Minneapolis and in Stockton, Calif., before police departments and communities all across the country started adopting his methods of “community-oriented policing.” Then, he used similar methods to end drug dealing in a suburb of Greensboro, N.C., and give its residents back their community. You should read “Don’t Shoot” for the full story – it’s fascinating.

The theme that lingers with me is the three-way police-community-gang relationship. Mistrust and broken promises between one or more of these groups was always at the root of the worst crime-ridden areas. Generally, the views are:

It gets to a point where everyone believes everyone else is thinking something they’re not. Worse, no one will talk about it, because no trust endures. Community-oriented policing breaks that cycle. 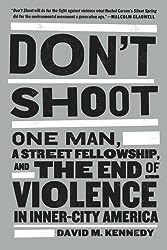 When cops talk to the community leaders, earn their trust by keeping promises, and admit their mistakes and role in the cycle; when the community gets serious about doing their own punishing of offenders and believes the cops aren’t trying to hold them down; when kids on the street realize the cops are serious and that their parents and churches are going to help them get jobs and programs – that’s when the communities improve. Kennedy’s work brings the parties together and shocks the system into trust, respect and cooperation. It has nothing to do with culture vs. culture, or law vs. street code, or values vs. values. Everyone has the same desires – to end the cycle of violence and mistrust. NO ONE likes the status quo, but no one can see a way out. The trust isn’t there. The  system needs a serious shock. A commitment from all parties. No more deaths. Don’t shoot.

This doesn’t happen easily. Sometimes the politics are so bad it can’t happen at all ( Baltimore’s public offices were so distrustful of each other that this project never got off the ground). Even when it does happen, it’s incredibly difficult to maintain. Decades of real, experienced prejudice don’t just disappear.

That’s what bothers me about Ferguson. Michael Brown’s violent death could have been the impetus – the shock that brings people together to begin healing. The police had the power to admit their mistakes and use a tragedy as a time of healing. Instead they lobbed tear gas and shot rubber bullets, and they perpetuated stereotypes seared into the minds of the community and the real criminals. They failed – and Ferguson’s kids will pay the price with more violence.

Don’t Shoot: One Man, A Street Fellowship, and the End of Violence in Inner-City America