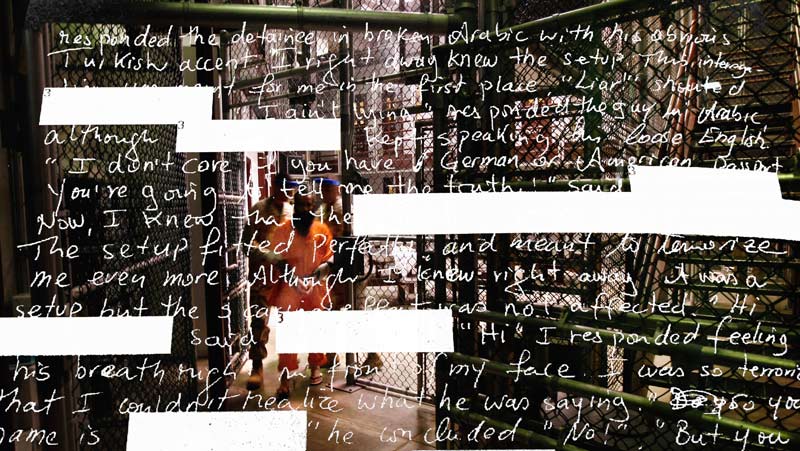 “Guantanamo Diary” is an account written by Mauritanian prisoner Mohamedou Ould Slahi. You can read Slahi’s official record here, thanks to the New York Times.

In his diary, Slahi paints a portrait that at best is a Kafka-esque nightmare of labyrinthine questioning from interrogators (asking him, for example, about events in Iraq in 2003 while he had been in captivity since early 2002), and at worst a gruesome account of the torture he endured, including beatings, waterboarding and a mock execution. His interrogations were reportedly personally approved by then-Secretary of Defense Donald Rumsfeld, who once dubbed Slahi the most valuable detainee in Guantanamo, a ludicrous claim. At no point was Slahi able to provide the United States with any useful information, even after he gave up and offered to say to his interrogators whatever they wanted to hear, true or not. He was even asked to implicate people he never knew in crimes he never saw.

However, Slahi wasn’t captured on the battlefields of Afghanistan or plotting an attack against the United States. In fact, he was working in Mauritania doing IT and telecommunications work, and when asked to answer questions about his associations, he voluntarily showed up to government offices, from which he was detained, transferred to a secret U.S. prison in Jordan, then flown to Guantanamo, all in secret and without informing any family members or the government of his home country.

Slahi wrote the entire manuscript while imprisoned in Guantanamo, and after a prolonged legal battle with the U.S. government by his lawyers and publishers, published the book in 2015. More from the Times on Slahi:

To be sure, Mr. Slahi’s pre-Guantánamo résumé cried out for scrutiny, especially after the Sept. 11, 2001, attacks. Born in Mauritania, he had joined Al Qaeda in 1990 to fight Afghanistan’s Communist government alongside Osama bin Laden. A cousin, also Mr. Slahi’s brother-in-law, was an aide to Bin Laden. In Germany, Mr. Slahi had once crossed paths with Ramzi bin al-Shibh, later a planner of the Sept. 11 attacks. Mr. Slahi had lived in Montreal and prayed at the same mosque as Ahmed Ressam, arrested in 1999 on charges of trying to bring explosives into the United States for the failed “millennium plot.”

Based on that history, the government concluded that Mr. Slahi was a “senior recruiter” for Al Qaeda and for a time, listed him as the most dangerous terrorist at Guantánamo. But it has never formally charged him. Mr. Slahi says he left Al Qaeda in 1992, long before it began to target America. His encounter with Mr. Bin al-Shibh lasted one evening and involved no discussion of anti-American plotting, he claims. And Mr. Ressam had left Montreal before Mr. Slahi arrived, and by his account, they never met.

A federal judge who reviewed Mr. Slahi’s habeas petition in 2010, James Robertson, concluded that the government’s evidence was “so attenuated, or so tainted by coercion and mistreatment, or so classified, that it cannot support a criminal prosecution.” The judge said the government’s fear that Mr. Slahi could rejoin Al Qaeda if freed “may indeed be well founded,” but that such concerns did not justify his continued imprisonment. Judge Robertson ordered his release.

Six years after clearing him, the U.S. finally released Slahi on Oct. 17 (last month!), and he has returned to life in Mauritania (if return to a normal life can happen after his experiences).

I encourage you to read “Guantanamo Diary” with a critical eye. I remained skeptical of his account throughout, but I could not find any evidence of subterfuge in his candid and unvarnished account of his experiences. He seems to have been in the wrong place at the wrong time one too many times in his life, but he is not a radical nor an enemy of the United States. To the contrary, his account is intelligent, reasoned, compassionate and even humorous at times.

What is perhaps most striking is the paranoia of the U.S. government, evidence not only by Slahi’s words but by the heavy redactions done by the Department of Defense before the book’s release. Throughout the book, many consecutive pages appear completely censored: 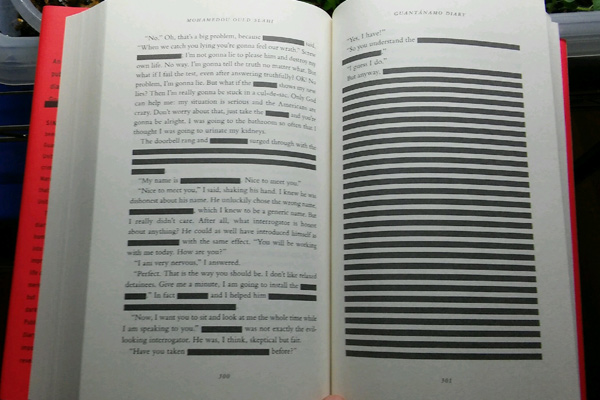 Further, they made some puzzling redactions:

The whole package – the redactions, Slahi’s account, Guantanamo itself – is an embarrassment to American values, to say the very least. We lost much credibility as a purveyor of human rights and justice in the world, and for what? We are no safer thanks to Guantanamo. Surely, if we were, the U.S. would have shouted it from the rooftops by now.

Slahi’s work isn’t light reading – it’s a difficult account to stomach. But I urge you to read it, if only to fully digest a moment in American history to which we should not return. President Obama, help shut that door by transferring the remaining prisoners and closing this camp before a new administration fills it with “bad dudes.”