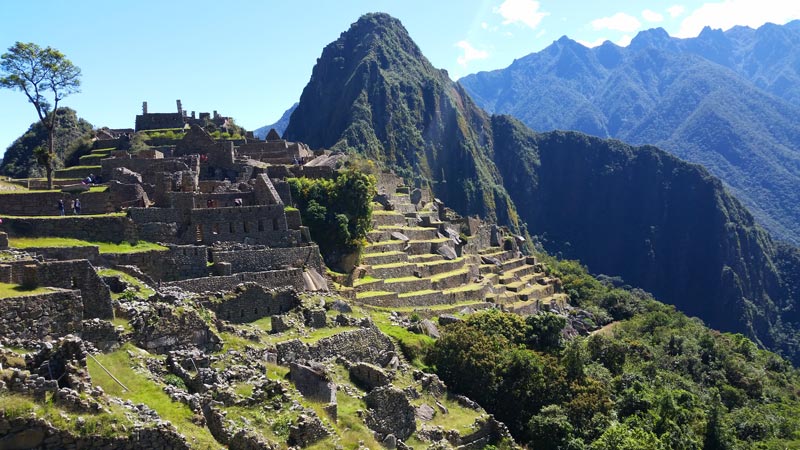 After a day in Cusco, a day hiking the Inca Trail, and a night in Aguas Calientes at the bottom of the Sacred Valley, my wife and I reached the culmination of our Peruvian expedition with a visit to Machu Picchu.

We took one of the first buses up to Machu Picchu, which helped us avoid the massive crowds that come later in the day as the train arrives from Ollantaytambo. As previously mentioned in my post about our Inca Trail hike, we contracted with the Llamapath touring company, so our guide Hever continued on with us for a second day, giving us a two-hour tour of the archaeological site. Frankly, this turned out to be totally not enough time – Machu Picchu is a huge site, and I feel like we barely saw half of it on the tour. Fortunately, we could stay as long as we wanted, and Taylor and I explored the site on our own for about three hours after the tour ended.

Here’s a short (and very amateur) video of our stay in Cusco, or hike on the Inca Trail and our visit to Machu Picchu. All of our footage was shot on our phones and a Canon point-and-shoot – no need for bulky cameras:

The site itself is overwhelming, both in the size and in the history and design. So much of it was built around astronomy. The main temple has two windows – one that aligns with the summer solstice and one for the winter solstice. There’s also a reflecting pool where certain constellations are reflected at specific times of the year. I can’t imagine how many years the city must have taken to build, especially since absolutely everything was made from massive white granite stones.

At the top stands a huge pyramid, on all three sides are gigantic agricultural terraces, and in between all different kinds of two-story houses, store rooms, aqueducts (that are still running, by the way), chambers for nobility and priests, sacred stones and much more. It’s amazing that the side remained hidden until 1911 given its size, and it’s also incredible that a city home to roughly 700 Inca people nearly 500 years ago fell abandoned so quickly. Only one mummy was ever found at the site, and the rest of the human remains found were the very old or very young. No one’s really sure what happened, or even what Machu Picchu is. Three theories exist currently: it was a summer home of Inca emperor Pachacuti, it was an Incan university, or it was some kind of religious site like a monastery or abbey.

However, what really enhanced the experience for me was our guide Hever’s accounts of history that directly challenged many things I had read about Machu Picchu and the Inca. 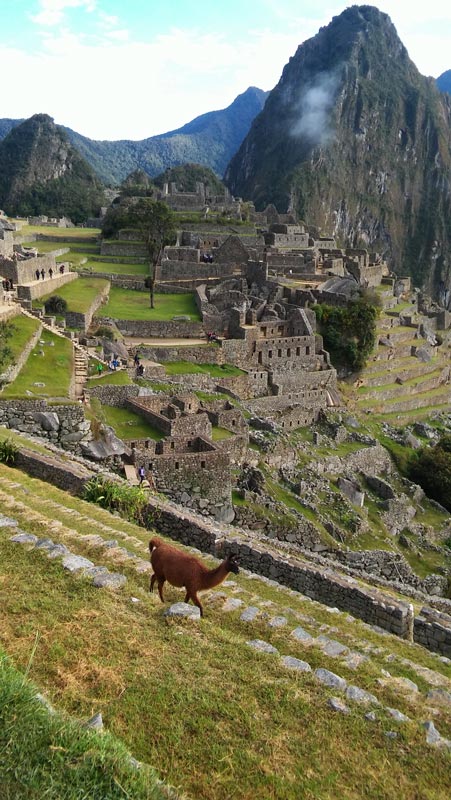 A native of Vilcabamba and an heir to Inca culture and history, Hever was no fan of European influence or western religions. He was an incredibly nice guy, but his contempt for the villains of Inca history – Spain and the Catholic church – was palpable. He provided a perspective that you won’t find in most histories.

I had been preparing for the trip by reading Kim MacQuarrie’s “The Last Days of the Incas,” which begins in 1532 when Francisco Pizarro first reached Peru and recounts the downfall of the Inca Empire, the rediscovery of Machu Picchu by Hiram Bingham and the initial discovery of the hidden last hideout of the final Inca emperor Manca Inca. Our guide refuted all three of those accounts.

First, as he told us his version of Inca history, I noticed he had a very different account of the first meeting between Pizarro and Inca emperor Atahualpa at Cajamarca. MacQuarrie’s book (and all Western histories, based on Spanish and Inca journals from the time) says that with under 200 men, Pizarro captured Atahualpa and held him as a puppet emperor for many months before his men boorishly and brutally executed him. Hever, on the other hand, said Atahualpa was never captured! Instead, he was tricked into drinking poisoned wine, but because he was so strong he held out for ten days before succumbing. In fact, he didn’t even consider Atahualpa a true Incan emperor – the last, he said, was Huayna Capac, even though Western history counts at least six more. Interesting, Huayna Capac died of smallpox just before Pizarro arrived in Peru.

On another account, a similar divergence appeared in Hever’s story. It’s well known that American explorer Hiram Bingham rediscovered the site in 1911, right? Wrong, Hever would say. Yes, Bingham arrived in 1911 and showed the site to the world, cleaning it up and beginning the real archaeological work. But, he said, the locals had known all along that Machu Picchu existed – for them it was no discovery at all!

Finally, Hever disputed another important finding MacQuarrie recounts – the rediscovery of historic Vilcabamba, the Amazonian refuge of the last vestige of Inca royalty and nobility, from which the empire conducted a 30-year guerrilla war against Spanish settlers in the 16th century. But to Hever, this was nonsense. He grew up in Vilcabamba – it was never lost or secret!

The lesson I took from hearing these two perspectives – the European and the Quechuan – was one of caution and respect for perspective. On one hand, it was easy for me to hear Hever’s angles on these ancient stories and see great pride and effort to protect the reputation of his ancestry. No one would want to believe their homeland’s former emperor was captured by a tiny band of foreign invaders and used as a puppet king! But on the other hand, who is to say the Spanish accounts are truthful? Many of them were written down decades later, and given their beliefs that they had a sacred charge to spread their way of life (and line their own pockets), why wouldn’t they also lie to protect their image?

Anyway, enough of me waxing poetic. Here’s me at Machu Picchu with a slightly pissed-off llama: 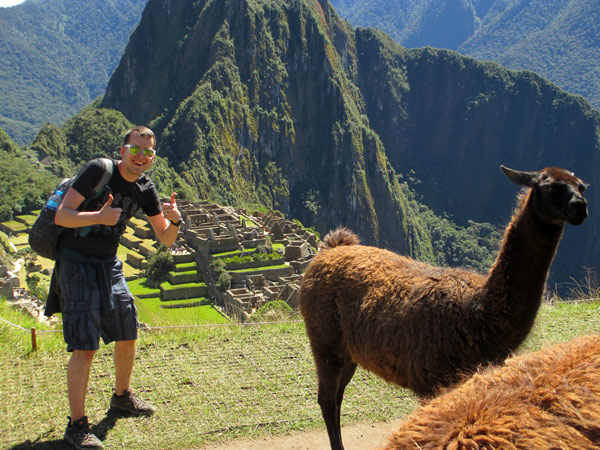 Be sure to check out some of my other Peru posts below. Also, leave a comment if you have any questions about Machu Picchu, the Inca Trail or Cusco – I’m happy to provide travel advice!