At first, this required implanted neuron sensors – aka dangerous and potentially damaging brain surgery. However, there have been some further advances to make available non-invasive caps that measure the same impulses of the brain. Here’s a video of that – in which two guys trade thoughts through that kind of setup. 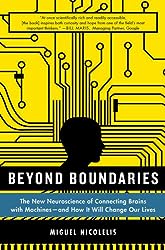 Nicolelis explains why these interfaces work, and it’s pretty incredible. Whenever we pick up any tool, our brain treats it as an extension of our arm. If you’re holding a rake, your brain handles that by acting as if your arm just got three times as long. Not only does it adjust the movements of your arm to accommodate the rake, it also can make assessments of your surroundings by sensing feedback received through the rake. Amazing!

The tools become a part of our brain and our body. That’s why we have such great abilities to finely control everything from screwdrivers to cars to video game controllers and musical instruments. Essentially all of our tools are some kind of brain-machine interface. So as far as robotic limbs go, our mind has been ready for these technological advances all along. We just needed the technology to catch up.

Definitely check out Beyond Boundaries if you’re interested in the brain, medical technologies, robotics or brain-machine interfaces. Even in the two or three years it’s been out, crazy advances have been made in the field. But for the layman (e.g. me), it’s a great exploration into where the field is and where it’s going. The future is here, and it’s pretty damn cool.

I, too, am working on my own robotic arm

I’ll let you know as soon as I can control it with my brain. In the meantime, I will now finish writing this blog post with my electronic arm:

One thought on “Mind over machine”