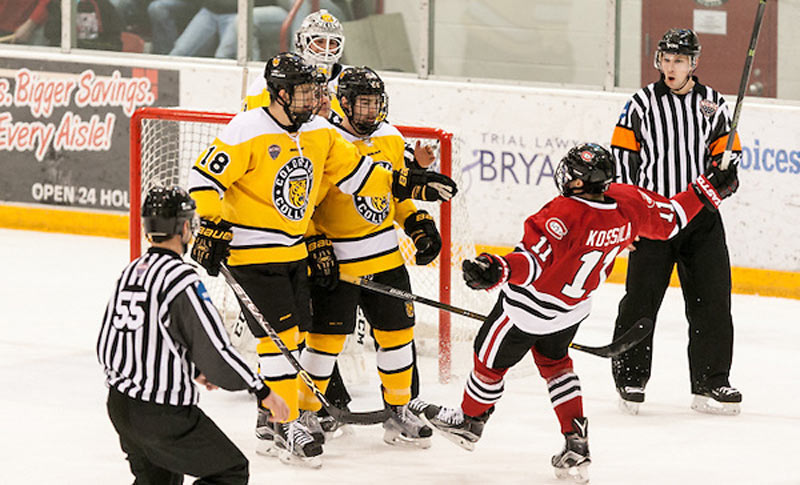 This week I’ve been looking at returning 2016-17 NCHC talent. I’ve evaluated the goaltenders and forwards. Today, let’s tackle the defenders.

In the forwards article, I mentioned just how much offensive talent has left the conference this year. But with the exception of a trio of North Dakota juniors, defensive talent largely sticks around. Coupled with the solid goaltenders who remain, this could be a year of defensive chess matches in the NCHC – very exciting stuff.

Before looking at any data, however, we need to have a quick discussion about the analysis itself, because this category is always more subjective than the other two. When we’re evaluating defensive players in hockey, we tend to conflate their actual defending abilities with their offensive contributions.

Defensemen are the most difficult position to assess in hockey, at all levels. You can evaluate them in the same way you do forwards, but that only tells you who the most offensive-oriented guys are. Trying to determine the most defensive defensemen can be difficult, especially with the lack of data we have at the NCAA level. For so long, plus/minus was the standard, but the stats community has come to a consensus that +/- is unreliable and useless. At the NHL level, two-way blue line talent can be looked at through ice time, relative Corsi, player usage charts, etc., (see here, here and here) but we simply don’t have that kind of data in college yet. We’re stuck with shots, shot blocks, faceoffs, goals and assists.

NCHC teams lose 17 defenseman in 16-17, just one less than last year. Let’s take a quick look at the top departures before getting to returning players:

Last year, I suspected Ethan Prow would be the best defender in the conference. That held up pretty well – Prow led blue liners in points, and overperformed statistical expectations by about 30%. Similarly, Nolan Zajac and Troy Stetcher – also in my top five – had good years. Matthew Caito was someone of a miss, though. Perhaps he had an off year, but he earned about 40% fewer points than I would have expected. Though quite a few top Miami defenders had poor years – perhaps something about their systems? Could be an artifact, too.

The Fighting Hawks lose the most at defense, as three juniors depart. Interesting, Western Michigan has zero returning defenders, a good sign for them in a year they’ll be seeking a new goalie. Also interesting is that some of the “best” defenders have very even ratings (close to 1.00), which differs from top forwards, who tend to have high ratings. This supports my theory posed last year, which suggests the best defenders cluster around 1.00, or “at offensive expectations.”

Let’s get to it – who are the top returning defenders in the NCHC? There are 47 returning this year, just one less than last year. Let’s look at the top d-men in a few of the more traditional ways – points, blocked shots, and blocks per game.

I’m also going to throw in shots/game, so we can start to suss out the offensive-oriented guys vs. the true defensive defenders. Here are those four categories:

Offensive performance mostly stands out in this table. We can see which d-men earned the most points, and there’s a lot of overlap with those who shoot the most. Guys like Butcher, Snuggerud, Kivihalme and Poolman contribute significantly to their team’s offense. Does this translate into their primary job of preventing opposing shots?

Well, let’s look at the blocks. The top shot blockers overlap little with the top offensive defenders. St. Cloud’s Jimmy Schuldt and Omaha’s Luc Snuggerud are the noticeable exceptions, but I’m still not sure that means they’re top defenders. I’m ambivalent about blocked shots. Sure, they prevent pucks from reaching the crease, but if you’re leading the league in blocked shots, it probably means teams are shooting a lot against you. This is why Colorado College and Omaha players appear frequently among the top shot blockers – both teams struggled with puck possession last year. On the flip side of that coin, I wouldn’t ding Duluth’s defensemen too much – the Bulldogs led the conference in possession last year, and clearly those players operate in a system that encourages possession and shooting from all players.

So… what have we learned here? Not much yet (hey, I said defensive assessment is hard). Let’s apply the statistical model to get a bit closer to the truth.

We’ll use the model we used with forwards – comparing returning defenders to the Average NCHC Defender. As I explained in that article, this method helps us understand who is making the most of their time on the ice, whether through skill or luck.

The Average NCHC Skater model has allowed us to put a point value on each kind of shot a player takes – wide, blocked, post, saved shot and goal. It also allows us to do a fair comparison of guys who took 250 shots against a guy who only took, say, 50. We run each player in the league through this model to get an expected points output. From there, we can compare each individual player’s efforts last year to the Average NCHC Defender and give them a rating based on how they compare to expectations.

What this method does is allows us to see the extent to which each defender took advantage of the opportunities they were given. That is, on average, each time Player X had the puck, how likely was he to make a decision that led to his team scoring compared with the other players in the league.

We’re also looking at only those players who took more than 50 shots. That roughly equates to players who got significant ice time in the majority of their team’s last season (aka cutting out the typical scratches).

Based off the hypothesis we posed last year, I’m going to look at two sets of defensemen – those who outperformed expectations, and those who were right at expectations. More on this in a minute.

First, here are the over-performers:

This makes for an interesting list, and likely less valid than the forwards, because of the smaller amount of shots taken and points earned. This results in more variability among the ratings.

Nevaleinen takes the top spot here. He earned 23 points where the model only expected him to earn seven. Interestingly, St. Cloud dominates this list. Why is that so? The Huskies scored goals in droves, netting 104 in league alone. That means these defenders earned a disproportionate amount of assists, which drives up their rating. I’m not saying they’re not good, but statistical artifacts like this need to be taken into account for a fair analysis. The overperformance is more impressive from players on teams that didn’t score many goals last year – like Western Michigan and Miami. Surprisingly though, there’s very little overlap between these players and the top point scorers – a good sign. Have we truly discovered the top defensive-minded blue liners?

Not yet. We’ve only really identified those guys who are the most offensively oriented. Should we look at those players who rank low against the Average NCHC Skater? No, those will be the players who are just plain not very good. What about those defenders who are smack in the middle – performing exactly as expected given the shots they take? Here are the players rated most closely to 1.00:

Huh! That’s interesting! Good news, Colorado College fans – if our theory is correct you’ve got a quartet of young, reliable up-and-coming defenders. Andrew Farny in particular shows promise, earning an above-average point tally and among the leading shot blockers in the NCHC. To see four Tigers lead a list that also includes the like of Louie Belpedio, Willie Raskob, Will Butcher and Luc Snuggerud would seem to suggest, defensively at least, their recent recruits show great promise.

Back to those other guys, though. Outside of the surprising CC inclusions, this evidence supports my theory that the best defensemen put in a “expected” offensive performance, allowing them to play hard on both ends of the ice. Many of these names I would expect on any short list of best defenders (Belpedio and Butcher are pre-season all conference selections). I think CC fans have good reason for optimism on the blue line.

These would all be major improvements, though I don’t know if it will be available any time soon. In the meantime, we have what we have.

Given the limited analyses we are able to perform:

There you have it – top goalies, top forwards, and now, top defenders. St. Cloud appears to have a very offensive-minded defense, and we’ll see if that keeps up this year. Honestly, every team has a bright spot on defense this year – though some teams are deeper than others. With the expectation of a down-year for offenses, it’ll be interesting to see who emerges on the blue-line. Colorado College, here’s your chance.

I’d love to see your rebuttals (find me on Twitter at @joel_gehringer). In the meantime, good luck to all teams on the ice starting this weekend. Prove me wrong, guys!