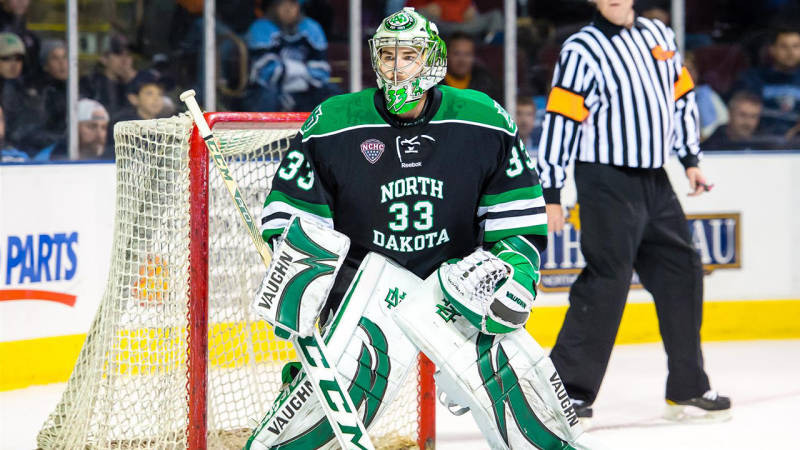 Who’s ready for year four of the National Collegiate Hockey Conference? So much off-season intrigue. A national champion among our ranks. A bunch of big names going pro. A will-they-won’t-they melodrama of expansion talk. Thank Gretzky the summer is almost over and college hockey is nearly here again.

It should be a very interesting year in the NCHC. The parity of the first two years seemed to dissipate in year three, with contenders separating themselves from teams not quite there. Also, the incredibly loaded rosters of last year have… uh, unloaded. This year, 15 of the top 20 point scorers from last season will not return, and six of those are early departures. In the year prior, the league lost only eight of the top 20 point scorers. From a qualitative perspective, that makes it tough to know what to expect, and even tougher to know who will emerge as the conference’s top talent.

Lucky for us, we can get quantitative! Last year, Taylor and I developed a series of models to assess returning players’ contributions. The model constructed an average NCHC position player and compared each individual real player to that standard, determining if they were overperfoming or underperfoming expectations. This helped (successfully, I might add) identify who some of the key players would be in the new season.

In this post, I’m revisiting that model and applying it for 2016-17. This is part one of a three-part series on returning NCHC talent. We’ll start with goaltenders, arguably the most important position on the ice, with the most potential to change a game. Later, we’ll look at forwards, and then we’ll wrap up with defenders. All of this should hopefully help inform some predictions for NCHC finishes in 2017.

Once again, my data comes from the invaluable College Hockey News database of Corsi events, which tracks every NCAA player throughout the year. I’ll try not to get to into the methodology in this post. If you’re really interested in that, I’ll have you check out last year’s installment, which explains everything in detail. This time around, let’s get to the good stuff.

The NCHC collectively loses nine goaltenders for 16-17, seven of whom saw significant playing time. With no disrespect to Duluth’s Matt McNeely or St. Cloud’s Rasmus Reijola, who combined saw less than 100 shots and appeared in two and five games respectively, let’s take a look at those seven significant contributors:

Duluth’s Kaskisuo and St. Cloud’s Lindgren leave the biggest holes to fill. Both performed well above average and appeared in nearly every game for their team. Our model shows both of these netminders let in 11% fewer goals than expected from an NCHC goalie, which puts them in “very good” but not “great” territory. The rest on this list, frankly, underperformed expectations. Nevertheless, this particularly leaves Miami and Western Michigan in a bind, because neither returns an heir apparent between the pipes. All in all, it looks like at least four NCHC teams will open the season with a fresh face in goal.

Let’s move on to the returning talent.

NCHC teams will have 10 returning goaltenders this year who saw significant playing time in 2015-16. I would consider five of them returning starters. Below is a breakdown of each player’s performance in four situations – all icetime, even strength situations, penalty kill situations, and close-game (defined as play when it’s less than a 2-goal game). These players are sorted by total save percentage:

This is the traditional way of evaluating goaltending – goals against average and save percentage. Thanks to the CHN data, we can also look at even strength, penalty kill and close situations. Assessing on save percentage, no surprise that North Dakota’s Cam Johnson and Denver’s Evan Cowley float to the top. Surprisingly, Omaha’s Evan Weninger also rates high, as does Denver’s Tanner Jaillet. After that it somewhat drops off. Again, three teams should start the season fairly confident in their goaltending. The rest are likely keeping their options open.

This is not a bad way of evaluating. However, we should take our analysis one step further.

Also keep in mind that this looking at NCHC goaltending in a relative sense. That is, all these guys are fairly high performers in the NCAA, but we’re concerned with their value within the NCHC.

If we apply this model to all returning goaltenders, we get the following:

Last year, when we compared actual performance to the expectations of the Average NCHC Goaltender, we saw a reshuffling of relative ratings. This year, however, there’s zero change among the list. In this case, the data has supported what we already know – the conference returns four very strong goalies on three different teams, and the rest have some work to do.

A couple extra observations. For the second year in a row, Denver has an awesome “problem” – two stellar returning goalies. Also, for the second year in a row, Evan Cowley rates significantly higher than Jaillet. Yet Jaillet continues to get the bulk of the minutes in net. This might be one of those strange coaching-eye effects. Cowley is a better overall goaltender, especially in penalty kill situations, but he does not appear to handle extended pressure well. In close situations, his save percentage drops to 90.4%. Jaillet, meanwhile, shines in close situations with a 94.2%. Unfortunately, his 88.6% penalty kill save percentage is mediocre at best. It’s very situational, and the data suggests Cowley will stop more shots, but I can understand why the coaches continue to play Jaillet.

Second observation – a lot of guys low on the list haven’t really faced many shots, and this throws off their ratings somewhat. More data will provide a truer assessment, so for fans of Western Michigan, who desperately needs a good tender, no reason to panic just yet. However, Colorado College’s Jacob Nehama faced more shots than any other NCHC goaltender, and his rating is alarmingly low for a returning starter. There’s room for improvement in his second year, and this is likely a “quality of competition” effect, but in the NCHC, that’s life.

Ok, that’s a nice look at last season, but we now have two full seasons of shot-metric data. So what if we look at career performance rather than simply last year performance? This will give us a much more robust picture of future expected performance of an NCHC goaltender. In theory, that is. In practice, this will only affect two few players – Johnson, Cowley and Jaillet:

Even with “career” data input, nothing changes. But it’s important we get in the habit of using all available data – looking at both most recent and most comprehensive lenses.

This time around, the advanced data simply confirms what we already knew. The NCHC has four top returning goaltenders, and they are:

Unlike last year when nearly every goaltender rated similarly, this year the debate is basically nonexistent – it’s these for guys and everyone else. Only a new entry into the league would look to challenge this ranking, which leads us to…

We obviously don’t have NCAA stats for incoming goalies or goalies who haven’t played yet, so they’ve been left out of this analysis. But let’s take a look at who’s coming in, and how they performed on their previous team (I left off Vermont-to-Denver transfer Packy Munson, as he in ineligible this year). I’ve also included a few backups who have played minimal time so far in their careers:

These stats aren’t apples to apples because the players come from different leagues. In addition, a juniors GAA/SV% doesn’t necessarily translate to the NCAA level.

The teams most in need of a starter are Miami, Duluth, St. Cloud and Western Michigan. Miami has a saturated roster of goalies, but you have to think the conversation starts with Evan McCarthy, who has already been in the system a year and has solid juniors numbers. Andrew Masters also looks like a competitior there. In Duluth, Hunter Shepard looks statistically most promising, and NAHL experience translates comparatively well to NCAAs. St. Cloud has a pair of intriguing freshman coming in, but there’s a quality of competition jump from the BCHL to the NCHC. Finally, Western would be wise to give this Blacker kid a shot – a .926 and a 2.24 GAA in USHL is fairly impressive, and they need strength in the net.

It’s a big year for turnover in NCHC nets – so long Kaskisuo, Lindgren and Hafner. All three of their teams will be searching for answers in net, some less apparent than others. That means it’s the Cam Johnson show in 2016-17, as he hopes to lead the North Dakota Fighting Hawks to a title defense. Denver’s Cowley and Jaillet return as college hockey’s most unfair goalie pairing. Omaha’s Weninger takes over as their clear #1 guy and now has to prove his mettle to an unsure Maverick nation. Colorado College appears excited about Jacob Nehama, though they certainly could use improvements from him or someone else, at least according to our analysis above. That leaves Miami, losing two average goaltenders and bringing in a couple promising prospects who should compete for the starting gig.

That’s all for now. Next time we’ll use a similar model to take a look at returning forwards, and those who stand out as top performers might surprise you.