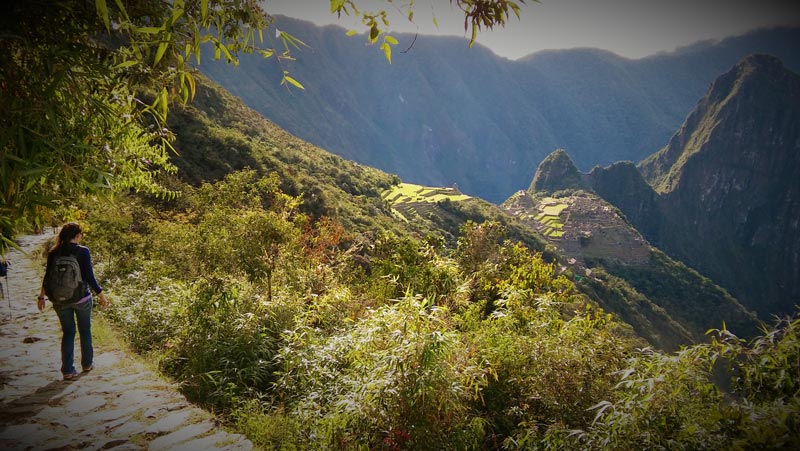 Five hundred years ago, the Inca controlled one of the largest empires in the world, ruling 10 million South American people in a political network that stretched from Quito to Lake Titicaca. Such a massive kingdom required prompt communication and supply lines, and over hundreds of years, the people of South America developed white-knuckle routes through the Andes upon which runners could deliver a message from the north to the south in a matter of days.

Today thousands retrace Inca footsteps along these routes, the most well-known of which begins near the Inca capital of Cusco and snakes through the Andes, ending at the world-famous ruins of Machu Picchu.

My wife Taylor and I decided to see the Inca Trail for ourselves in May 2016. The following recounts some of the highlights and suggestions from our hike. Regardless of what route you take, it’s a one-of-a-kind, once-in-a-lifetime adventure.

The full Inca Trail is a four-day, 26-mile hike that passes through nearly a dozen historical Inca sites. The path starts at 9,000 ft., climbs to 13,700 ft., and includes about 10 miles of hiking above 11,000 ft. and three nights sleeping atop the frigid, airless Andes.

While I am certainly up for adventures, I was in no shape for such a trek, and we only had three days in Peru anyway, so we opted for the shorter two-day hike, which is a 10-mile hike that starts around 7,400 ft., climbs to 9,000 and then drops quickly into Machu Picchu and Aguas Calientes, the small touristy town at the bottom of the valley (6,000 ft.). This trail still goes through three of the major Inca sites, with about three more visible from the trail. 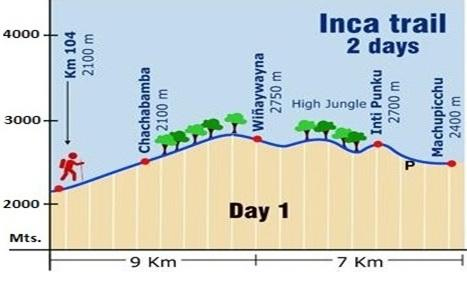 On the first day, we hiked from the site of Chachabamba – at the bottom of the Sacred Valley near the banks of an Amazonian tributary – to Inti Punku, the Sun Gate. From there, you walk down to Aguas Calientes, passing Machu Picchu, to rest and stay the night. The next morning, we caught one of the first buses up to the Machu Picchu site, went on a guided tour for about two hours, then had the rest of our day to explore the ruins and the surrounding area for ourselves. For average hikers like ourselves, this itinerary hit the sweet spot.

Regardless of what hike you choose, you’ll need a guide for your excursion. Trail access is tightly controlled by the Peruvian government. We used the tour service Llamapath, which I found online and booked a couple of months before our trip. I recommend booking your hike early, because Peru only allows 200 hikers on the Inca Trail each day, so if you’re trying to get a tour last minute, you could be out of luck. Llamapath was excellent – while a little expensive, they handled all of the reservation of trail access, finding a place to stay in Aguas Calientes, coordinating meals on the hike, and securing tickets and transportation to and from Machu Picchu. Also, I don’t know if this is normal, but our hike was a personal one – just me, my wife and our guide. No large tour groups, no tight schedule – we were able to take our time, ask questions, stop for photos whenever we wanted, and really enjoy the quiet and solitude of the Inca Trail. 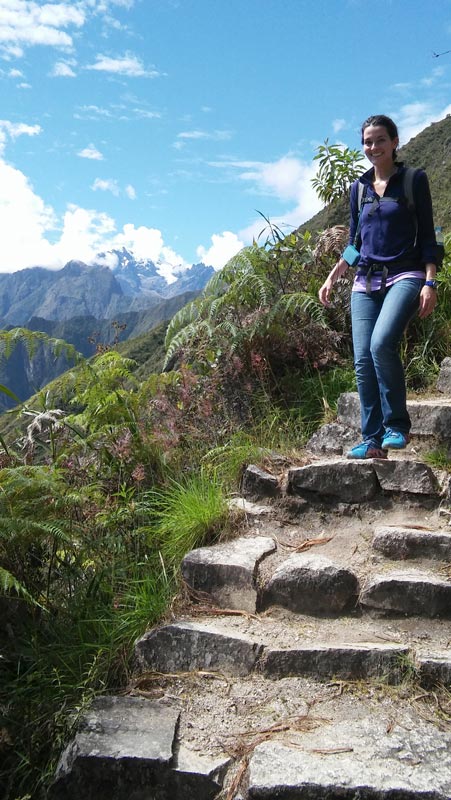 Our guide Hever, a 30-year-old seasoned veteran of the trails, had grown up in the area, hailing from the town of Vilcabamba, the last stronghold of the Inca Empire. A native speak of Quechua, he was proficient in three languages, including Spanish and English, and his childhood and heritage informed a fascinating historical narrative that he relayed to us as we climbed. As an Inca descendant, his accounts of the last days of the Inca diverted heavily from the European record. You could sense his pride in Peruvian heritage. I felt incredibly grateful to him for sharing his perspective along our hike.

Along the hike, I couldn’t help but marvel at the beauty of the Andes all around us. I’ve seen other mountain ranges of the world – the Rockies, the Appalachians, the Alps – but the Andes seemed unique in their lean, vertiginous, green slopes and deep, snaking valleys. Clinging to the side of the hills, we could look down 2,000 feet to the river below or up 3,000 to rigid glaciers above us. Just incredible.

Over the changes in elevation, we walked through clearly defined biomes, moving dramatically from one mountainside of reddish brush and grass to Amazonian rainforest on the slope immediately adjacent. All the while, in the distance, we could loop up to the hilltops and see the massive Inca sites to which we were climbing, growing ever closer with each steep set of uneven stone-paved steps.

But we didn’t have to look out across the panorama for wondrous sites – the Inca Trail is home to more than 200 species of orchid, and I think we passed by every one of them. Our hike in late May came just after the end of the rainy season when most plants were in full bloom. Yellow, pink, purple, blue, white, orange – we came across so many varieties and so much abundance I lost track, and our guide has to keep reminding us that we didn’t need a photo of every orchid because another would be right around the bend. Also, the massive Inca sites we were there to see.

Sure enough, when we reached our first destination, Winay Wayna, the orchids faded into the background. Winay Wayna – which means “forever young” and is naturally named after one of the native orchid species – was a massive and incredible sight. Long, wining terraces climb the steep mountainside for what has to be a few hundred feet, and jutting out of the middle sit dozens of former homes, temples and storehouses. Historians believe the entire site was an agricultural laboratory where the Inca experimented and developed new and different types of crops to feed the empire. The terraces were built so that different levels created different microclimates and dozens of varieties of crops could be grown on the same mountainside. Also impressive (and found at places like Machu Picchu) are the aqueducts – mountain springs that were channeled through the village as a fresh water source. Water still runs through the aqueducts today – it’s cold and refreshing.

Winay Wayna effectively ended the climb. From there, the trail flattened out except for a few sets of “gringo killers” as Hever called some of the long steep Inca staircases. Soon enough we were climbing one of these flights to Inti Punku – the Sun Gate – where we passed over the mountainside and saw Machu Picchu on the adjacent peak. We’d made it – sweaty, odorous and weak in the knee. But it didn’t matter. Now, we could sit and enjoy the view.

Few words could sufficiently describe the feeling of completing the hike and seeing this site, so here’s a few photos from our hike and Machu Picchu instead. Take a look and see if the Inca Trail might be for you! 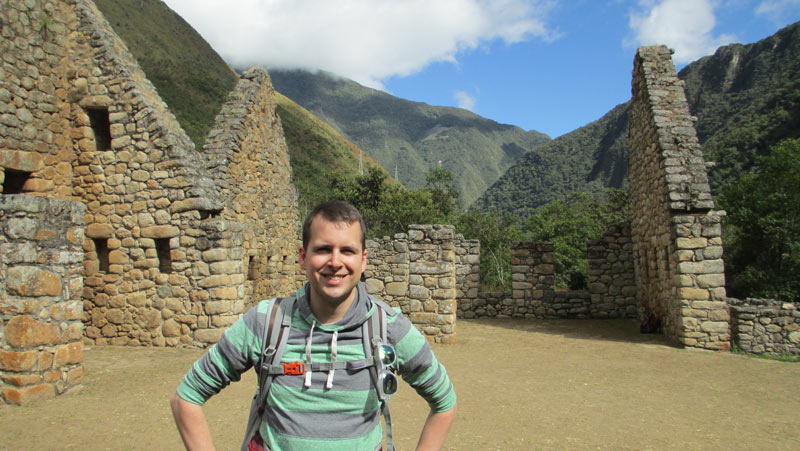 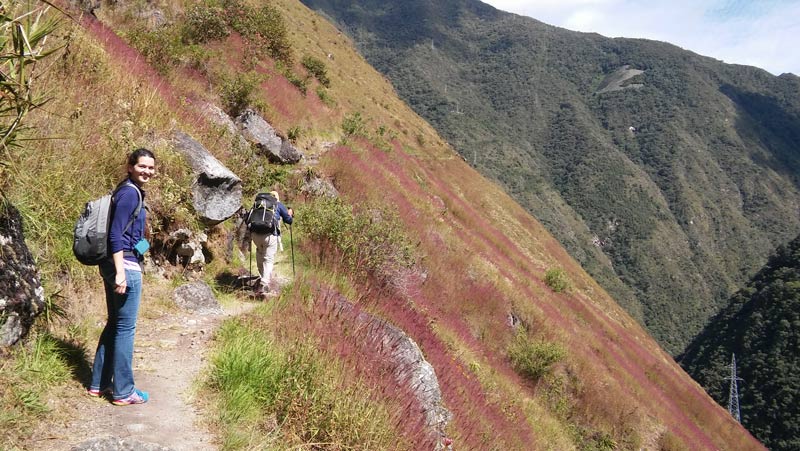 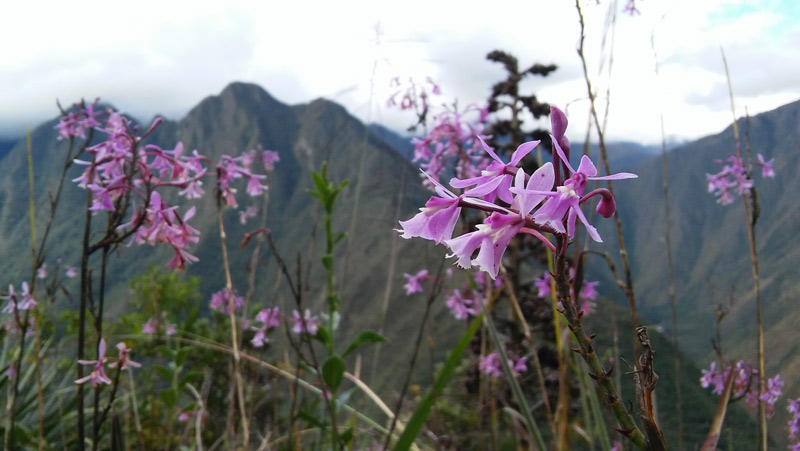 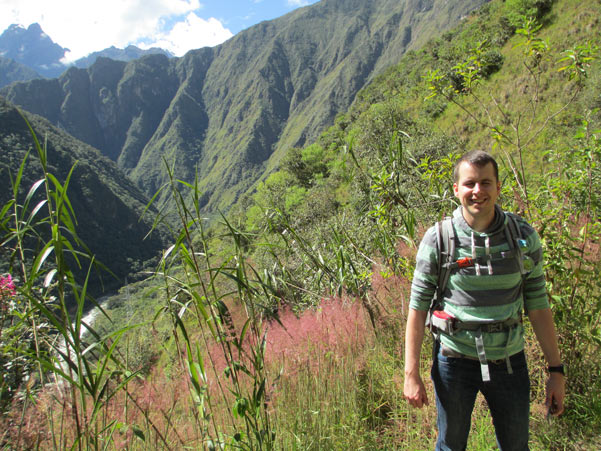 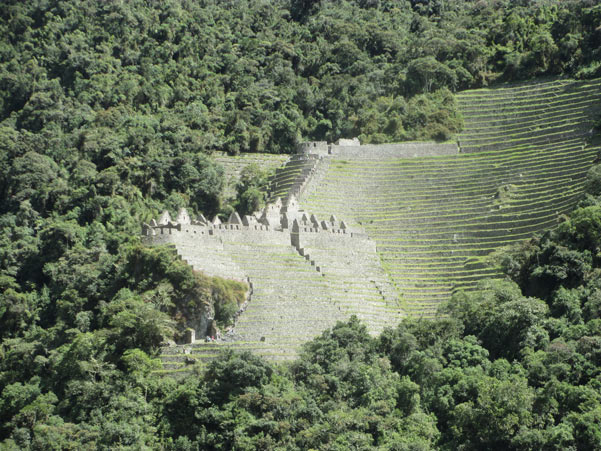 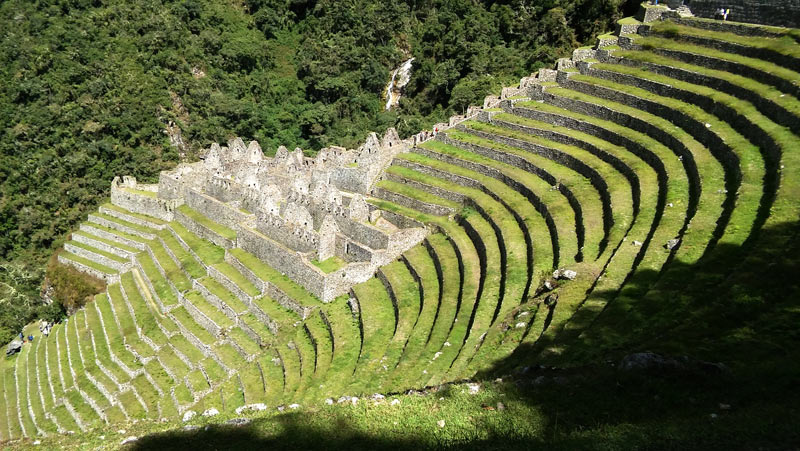 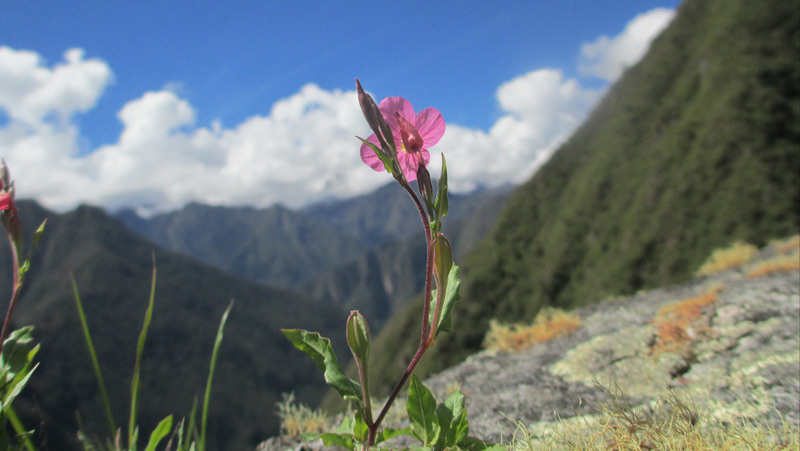 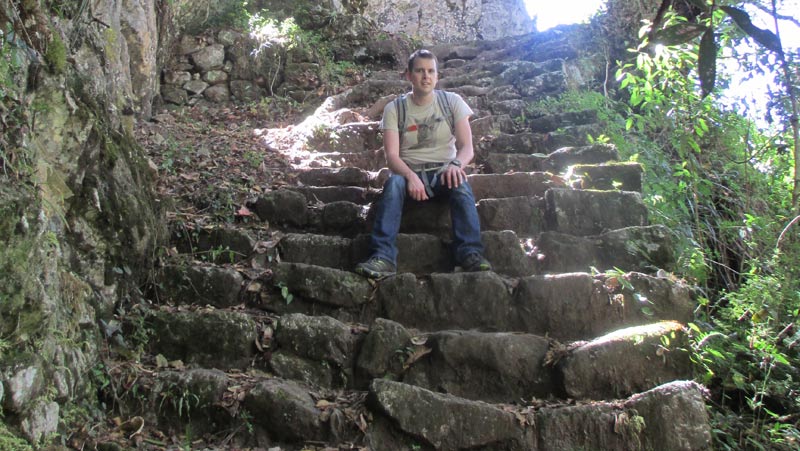 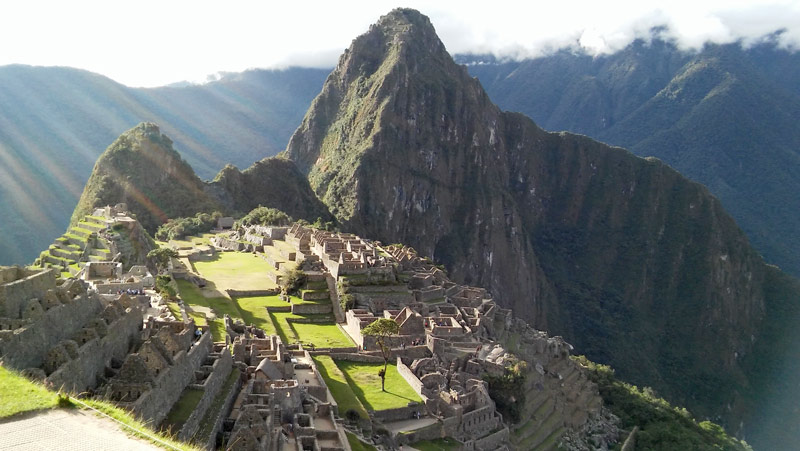 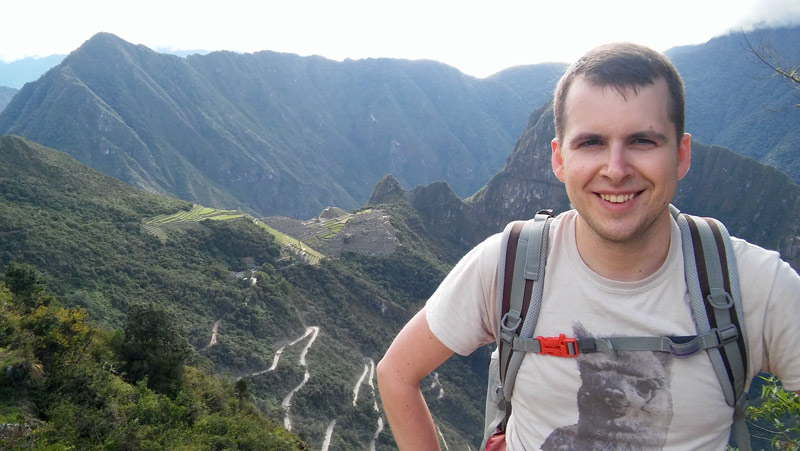 <
►
>
Starting our ascent into the Andes. Here you can see the Andean highland brush on one mountain and the Amazonian jungle on the next. In the distance, Winay Wayna.

To see more photos, videos and stories about our travel in Peru, see the links below!

2 thoughts on “On the Inca Trail”