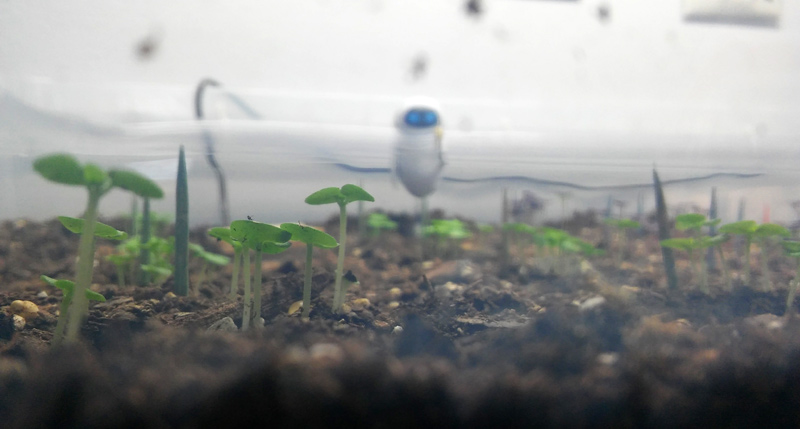 Even robots need a little motivation every once in a while. My Piplanter was no exception.

Nine months after I first booted up my JG Piplanter (which is still keeping itself updated hourly here and here), the system is growing a fresh batch of basil, which should be ready just in time for summer. But for a while there, things got a little dodgy, and I was worried the experiment had entered its end stage.

For starters, some of the basil plants were collapsing practically overnight. I was concerned they were being shocked by the moisture sensors, or that they weren’t getting enough water. Yet even after adjustments, plants continued to wilt and die unexpectedly. As it turns out, some of the basil seeds had brought in a fatal fusarium wilt. Bad news. All of the plants and soil would have to go, and the entire planter needed sterilization. 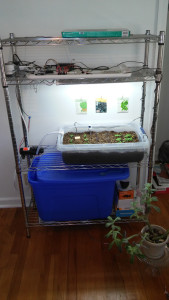 No problem, I thought. This would give me a chance to replace the moisture sensors, which had rusted down to nearly nothing, and to redesign the irrigation system, which wasn’t doing a great job of evenly watering the plants. Over a couple days in January, I cleaned and rebuilt the system.

But there was another issue – we moved. I actually managed to transport the Piplanter completely intact (in a moving van, and down and up two flights of stairs). But its new location was in a room and location with 50% less sunlight. Not to mention, the dark days of December starved the plants of light, even with the grow lamp on 12 hours per day, and the winter months made this drafty room about 15-20 degrees colder than the previous spot.

At first, the refreshed planter shot up seedlings, but all of them died in about a month. I think the cold had a lot to do with it, because many of them shot up quickly but never grew any bigger.

In addition, it took a little while to work the kinks out of the new watering pattern. At first the pressure was way too low. I had drilled holes that were too big, and the water just dribbled down the sides of the bin. So I installed new tubing with smaller holes, which now sprays water across the full length of the planter from both sides (I even sprayed myself in the eye while testing it).

Finally, I updated the Pi software so that I could SSH into the system and control it remotely. That is, I no longer need to haul a flat screen TV monitor and keyboard into the room every time I need to access the system. I can simply remote in from my laptop. I know this is pretty run-of-the-mill stuff to most tech people, but it was a first for me, and made working with the PiPlanter so much easier.

I replanted once more, this time with about twice the seeds. I also switched to new varieties of seed, including a mini mounding basil variety. With a little help, the seeds have a started again, and as the days grow longer and warmer, the new plants look a little bigger and happier each day. Now I’m keeping my fingers crossed that the wilt stays away and we will soon be back to a regular supply of basil to feed our addiction.

Check out new photos and a recent video below! 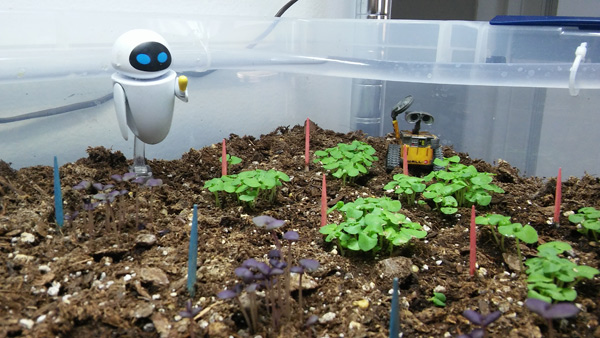 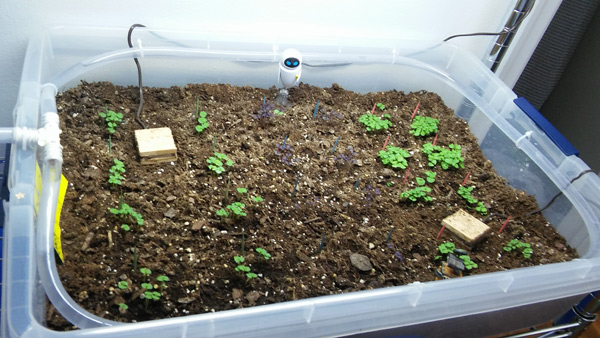 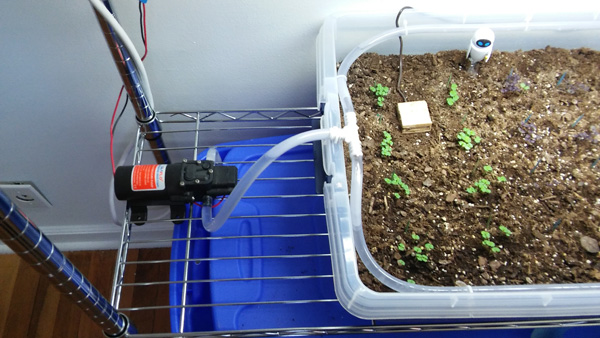 <
►
>
The revised irrigation system encircles the top rim of the basin and better pressure for more even coverage.